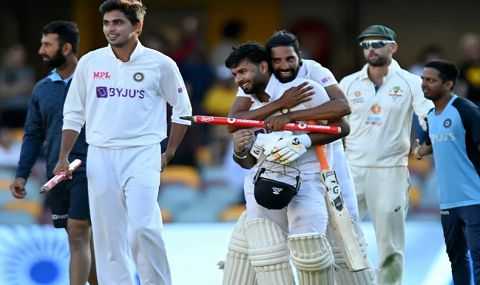 A brave India, driven by its courageous youngsters, managed an exciting three-wicket win over Australia in the 4th Test to declare the series 2-1 and retain the Border-Gavaskar Trophy Brisbane. Resuming at 4 for none on the last day, India overhauled the target with 18 balls to spare in a match that went down to the wire. Rishabh Pant led the chase with his aggressive yet fully grown unbeaten 89, while Shubman Gill scored 91.

Cheteshwar Pujara was withstanding many unpleasant blows on his body in his dogged 56-run knock that he raised with a 211-ball vigil.

The Australian team had not been beaten at the Gabba Stadium since falling to Viv Richards’ all-conquering West Indies side by nine wickets in November 1988. For 7, India’s 329 smashed the 69-year-old record for the greatest run-chase at the Gabba, set by Australia, who scored 236 for 7 to beat the West Indies in 1951.